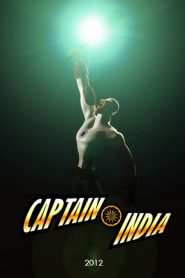 15-year-old Veer lives in a Mumbai slum and dreams of being the captain of the Indian cricket team. He plays cricket on the streets and one of his few companions is Luddu, a street dog. Occasionally he meets his friend Raghu, who works in a car garage as a mechanic. With no silver lining in view, one stormy evening, something strange happens, that changes the life of Veer forever. He discovers strange superpowers in him after this incident.
The sudden appearance of a superhero in Mumbai, whom people refer to as ‘Captain India’, shakes the underworld and also Kaala Haat, the controller of the Mumbai underworld. Kaala Haat wants something that ‘Captain India’ possesses; something so important, that it can make him the controller of the world. Meanwhile, Veer finds a good friend in Mini; the coach’s daughter. However something leads to the downfall and terrible failure of Veer and also Captain India. Can Veer aka Captain India rise again to meet people’s expectations?